I originally had no intention of diving in Komodo, primarily because I’d heard that the currents are crazy intense and as a new diver, I didn’t think I had the confidence to undertake that kind of challenge just yet. I’m so glad I took up that crazy challenge!

I was on the boat trip from Lombok to Komodo when I realised that I was traveling to what is known as one of the best dive sites in the world, and that I’d be a complete fool not to at least stay for a day or two to get in some diving. I’d just done my SSI Advanced course on Gili T a few weeks earlier so I was feeling a lot more confident in the water, and reading up a bit more on the dive sites, it sounded like there were a fair amount that I could do without feeling entirely out of my depth. I was a little concerned about how my knee would maintain in harsh currents as it was particularly grumpy after all the activity in the weeks prior, but I wasn’t going to let that (or a broken toe) stop me.

On arriving in Labuan Bajo, the main harbour port on Flores, I checked into my hotel (which I’m not linking because it was ridiculously overpriced and not even vaguely worth the money) and headed to Blue Marlin Dive to sign up for a day of diving.

The dive schedule for the following day was the north sites, which according to the staff had “the most intense currents but also the most epic sites”. Hmmm… You only live once, right? Sign me up! I have to laugh at myself; I worry far too much at the best of times and am an overly-cautious control freak, but when faced with any challenge that terrifies but excites me, I will still jump in wholeheartedly despite any (supposed) voice of reason in my head.

I had no idea that that decision would result in me staying in Labuan Bajo for almost 2 weeks, instead of the initially intended 2 or 3 days. Why, you ask? Because the diving is OUT OF THIS WORLD!!! I ended up doing 12 dives during my stay in Komodo (so there are loads more videos still to come), and I’m pretty certain that it will go down as some of the best diving that I will ever do.


This particular dive at Castle Rock was the first of three dives on my first day diving with Blue Marlin, and a site that I visited twice during my extended stay. It’s an exquisite spot, and I’m honestly surprised that any of my footage was usable because as soon as I hit the water I felt like I was constantly flipping around trying to capture the overwhelming amount of exquisite life that was flooding my vision.

While this was definitely the strongest drift dive I’d done to date, you ain’t seen nothing yet… The Cauldron is up next!

TOP TIP: I highly recommend Blue Marlin Dive if you’re planning on diving in Komodo. The team is incredibly professional and just generally rad to be around, and I would suggest staying on their hop-on hop-off liveaboard to get the most out of your time (and money) there. While I didn’t stay on the liveaboard myself (because I didn’t know any better), if or when I go back, that’s where you’ll find me. 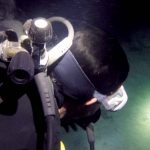 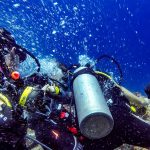 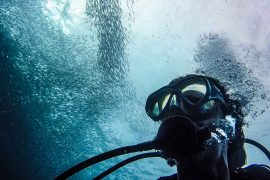 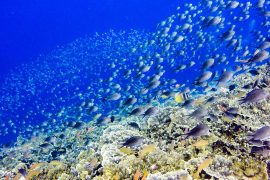 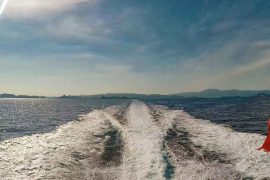